During one of my exchanges on Twitter, I was sent another meme:

Now, just getting another meme about what you should or should not be able to see of one place from another is not, usually, enough to justify the time to write a blog entry. But there was just something so brazenly misleading about this one that I felt the need.

So instead of starting at the top, let's start in the center, with the the claim:

What? How does the sun being behind the island confirm anything about refraction? In fact, it seems to me that what the sun behind the sun really confirms is that the Earth is not flat! Nothing about the position of the sun supports a flat Earth. So let's move on to the basic math, as we've done so many times.

Let's start with figuring out if it is plausible that this is a genuine image. Flat-Earthers are always calling any photo that doesn't support their nonsense fake, so we should at least give this a quick skeptical look.

The photo purports to be from Kauai Airport, which doesn't exist, but that's just semantics, because the airport that does exist on the Island of Kauai is Lihue, on the southeast coast of the island. Okay, we'll go with that.

Now Oahu is southeast of Kauai, bearing about 112 degrees. Could the sun be behind the island? Yes, it could, although not on a flat Earth (had to get that in), and the picture would have to have been taken in late November or early January. But this is plausible, so we'll stipulate here that this is, most likely, an actual picture of Oahu, taken from Lihue Airport.

So now let's go to the top and look at the claim. First we'll start with the line: "Spherical Trigonometry of Sphere...." Can we stop there for a moment? Can we just savor that?

So, here's the next part: "24,901 of Circumference at 90 Miles Is 5,402 Drop of Curvature." Including the circumference is probably meant to convince a viewer of this meme that the maker of this meme has done some hard math. As is the exact figure 5,402. I don't know where the maker of the meme actually gets this figure; it's close to, but not exactly, 8 inches per miles squared, about which I've already written.

But of course, how much drop there is actually tells us nothing about how much of a distant object you should see over a given span of ocean, unless you're standing in the ocean with your eyes at the level of the water. Sounds uncomfortable, although less so in the Pacific surrounding the Hawaiian Islands, where the water is usually quite warm.

But since it's plain that this photo was not taken in the water, it's time to move on to base facts. It seems to me that this photo was taken out of an airplane window as the plane was taxiing on a runway close to the shore. As I mentioned in my other blog post, calculating what you can see in the distance requires knowing how high above the water you are. You can't tell exactly from a photo, but Lihue Airport is 153 feet above mean sea level. I'm going to add ten feet for the distance from the tarmac to the window.

Let's keep that in mind while we go through the rest of the numbers. The meme shows something from Google that says that the elevation of Oahu is 4003 feet. I'm not sure what the elevation refers to, but the highest point on Oahu is Ka'ala, which tops out at 4,026 feet. Not a big difference, and not really an important one, as we'll see.

The next figure is slight more important. The meme measures from Lihue to an arbitrary point on the north tip of Oahu to get its 90 mile figure. But the distance from Lihue to the peak of Ka'ala is only about 83 miles, as show by my screen capture below. 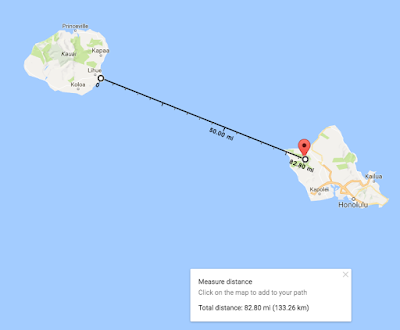 So, we plug the figures into this calculator, and find that from Lihue, we should indeed be able to see the top 1000 feet of the tallest features of Oahu. Looks about right, even without taking refraction into account.

Could there be refraction? Well, despite the wording of this meme, there can always be refraction over water. What kind of mirage this might produce depends on the temperatures of the air and the water. In Hawaii, these effects are probably quite small, because the difference between the air and water temperature is negligible.

But it's not the sun behind the island that proves that. It's just good old optical physics. Which flat-Earthers would know if they did any actual research.

Oh, and the Earth is a sphere. Case closed.
Posted by Gordon Brooks at 8:42 AM 1 comment:

You can support my work when you shop at Amazon.com

Why I Don't Debate Flat-Earthers

More Information In My Book!

I should mention that one of the books you can reed for free is mine. Hint.

A fascinating read on the history of the flat-Earth idea:

After a year and a half of fielding comments on this blog, I have decided that I will no longer allow comments. There has been little added to the discussion by the comments on most posts. The exceptions, and there have been some, will be incorporated when I migrate the explanatory posts to a new website sometime in the coming year.
For the most part, though, there have been comments which were not even worth the time to read before deleting them. And so I'm just not going to spend the time. Anyone can, with a small amount of effect, find an email address at which to contact me if the need should arise.

"What I truly hate is the fact that there is such a large segment of society, so lacking in both education and imagination, that they cannot fathom a world unfettered by their limited knowledge and vision, and by their paranoid fantasies.
"What's more depressing is that these people consider themselves the enlightened members of society, and are willing—quick, in fact—to demean and insult the most brilliant minds in human history to make themselves feel worthwhile."