When flat-Earthers talk about the shape of the Earth, most of them propose that it is a disc, with the North Pole as the center, and what we think is the South Pole around the rim, forming a great ice wall. As I showed on my previous post, the idea is that the sun and moon circle around the disc and create day and night, and somehow moon phases and eclipses.

But that's not the subject of this post. There was quite a stir awhile back on YouTube when someone found a map in the collection of the Boston Public Library. This is the map: 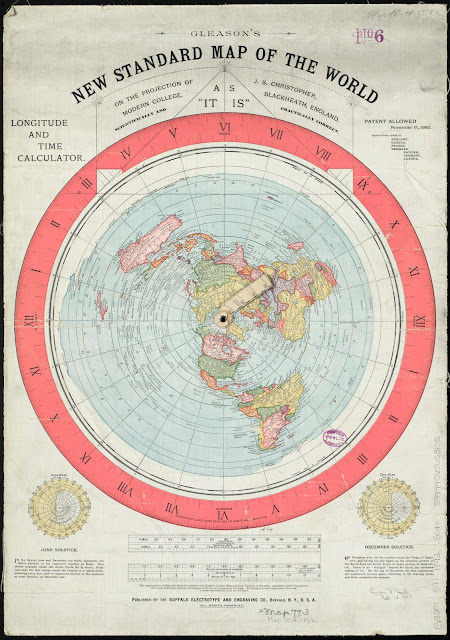 Look! there it is! North Pole in the middle, big ice ring around the perimeter. The flat Earth!

Well, maybe. Closer examination reveals a few clues. The first is in the upper left corner, where is says: Longitude and Time Calculator. There is also that weird something sticking out from the center, that seems to be riveted in the middle and torn off at around 30 degrees north. What is that for?

And there are numbers around the rim that must serve some function.

More telling, especially to anyone who's had a little bit of cartography education, is one very important word near the top. It says that this map is "On the Projection of J. S. Christopher, Modern College, Blackheath, England." Projection means that it is derived from some other shape, like maybe a globe.

Flat-Earthers make much of the words "As It Is" and "Scientifically and Practically Correct," and even more of the descriptions of the motion of the sun in the lower corners. But what did Gleason have to say about it? Do we know?

Well, we certainly know what he said on his US Patent application from 1895.  Here is Gleason's concept drawing as submitted: 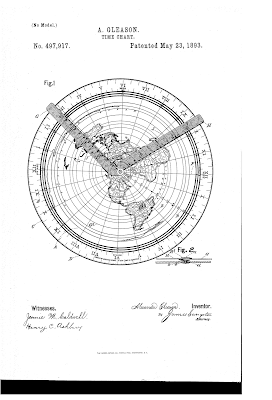 You can read the entire patent, which describes the map's use as a time calculator for students. But the most important passage from the flat-Earth standpoint is this:

The map is not so extorted as to lose the relative latitude and longitude of any places on the land or sea, but retains all latitudes and longitudes of places agreeing with other recognized authors; and as the proper relations of continents and countries all stand in their relative position to each other, they are thus impressed upon the mind of the student. The extorsion of the map from that of a globe consists, mainly in the straightening out of the meridian lines allowing each to retain their original value from Greenwich, the equator to the two poles.

The use of "extorted" in the sense of "distorted" is interesting here, but the intent is clear; the map is not "as it is" (which I think may have been a slogan of the map's publisher), but a projection that preserves the positions with regard to longitude lines, but not the distances between them (distances between lines of latitude, however, are preserved). And note his phrasing "the equator to the two poles." A flat Earth does not have poles.

This type of projection is know as an azimuthal equidistant projection, and when properly used it has many applications in navigation, telecommunications, and even military planning. The projection method has been known for about 1000 years. Azimuthal projections are not always centered on the North Pole; they can be generated mathematically from any point on the globe. You can generate one for yourself online.

The fact that so many flat-Earthers automatically dub this a "flat-Earth map" everywhere they see it shows a profound lack of willingness to do deep research, and a penchant for jumping onto bandwagons.

I think Gleason would be appalled.

ADDENDUM: Well, apparently I was wrong about Gleason. He really was a flat-Earther after all. I will do a full post on this when I get the chance.

So why did the patent examiners of several nations grant a patent to a flat-Earth map? Because the patent application conveniently left that little detail out. More to follow, along with revisions to this post.

You can support my work when you shop at Amazon.com

Why I Don't Debate Flat-Earthers

More Information In My Book!

I should mention that one of the books you can reed for free is mine. Hint.

A fascinating read on the history of the flat-Earth idea:

After a year and a half of fielding comments on this blog, I have decided that I will no longer allow comments. There has been little added to the discussion by the comments on most posts. The exceptions, and there have been some, will be incorporated when I migrate the explanatory posts to a new website sometime in the coming year.
For the most part, though, there have been comments which were not even worth the time to read before deleting them. And so I'm just not going to spend the time. Anyone can, with a small amount of effect, find an email address at which to contact me if the need should arise.

"What I truly hate is the fact that there is such a large segment of society, so lacking in both education and imagination, that they cannot fathom a world unfettered by their limited knowledge and vision, and by their paranoid fantasies.
"What's more depressing is that these people consider themselves the enlightened members of society, and are willing—quick, in fact—to demean and insult the most brilliant minds in human history to make themselves feel worthwhile."